Rachel's first stop on her Deep South US fly-drive trip was Nashville, where she stayed for two nights. Read on for more about her experiences of 'Music City, USA'...

‘Welcome to the Honky Tonk!’ The capital of the state of Tennessee, Nashville is synonymous with country music, and has made the careers of some of the most famous country stars. As the Queen of country music herself, Dolly Parton said (or sang), ‘Down on music row, If you want to be a star, That’s where you’ve got to go…I was on my way to Nashville, I just couldn’t hardly wait, ‘Till I could sing my songs To the folks on Music Row.’

Watch our video- Rachel on the Road; Nashville Highlights

Unlike Memphis and New Orleans, Nashville is located on the banks of the Cumberland river, which gave it an excellent strategic position as a port and encouraged its initial growth before it became a railway centre in the 19th century. Today, it’s the most populous city in Tennessee. 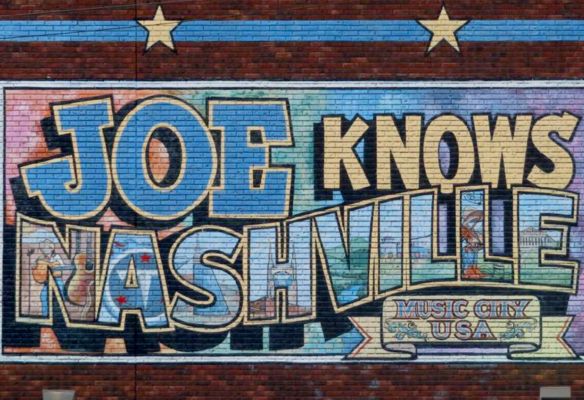 Although there are significant Civil War sites around the city – battle sites such as the Battle of Nashville, and the nearby Battle of Franklin and Battle of Stones River can be seen, as well as antebellum plantation houses, such as Belle Meade Plantation, Belmont Mansion, and Carnton Plantation in Franklin – it would probably be fair to say the city’s music heritage draws the vast majority of its visitors. After all, Nashville is ‘Music City, USA’ a moniker first given to it in 1950 by WSM-AM announcer David Cobb, which happened to stick. (Funnily enough, Queen Victoria reportedly said ‘These young people must surely come from a musical city’ after receiving and hearing a performance by the Fisk Jubilee Singers way back in 1873.) The Nashville Sound, developed in the 50s by locally based RCA Victor, Columbia Records and Decca Records, replaced the fiddles, steel guitar and nasal lead vocals which characterised the traditional honky tonk style formerly popular in the 30s and 40s with smoother elements borrowed from 1950s pop music (like string sections, and crooning lead vocals supported by background vocals). It was Country Music’s fightback against the chart dominance of the brand-new Rock & Roll. 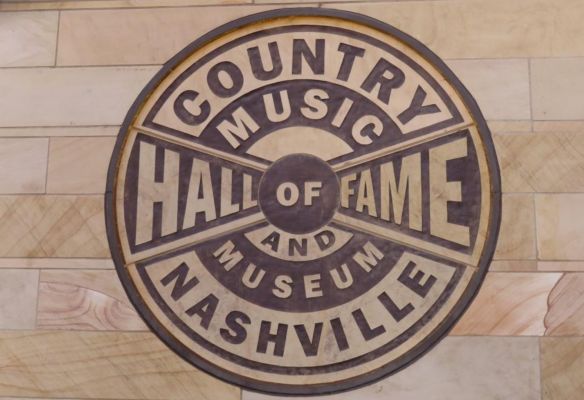 It wasn’t just the Nashville Sound that ensured the city would forever be associated with Country Music; here, you’ll find the Country Music Hall of Fame and Museum, as well as the famous Grand Ole Opry, where you can still watch live performances for the world’s longest-running live radio show (on select days only – it was closed during Rachel and Bill’s stay), and – of course – the city’s famed Music Row, where aspiring country music starlets would hope to gain a record deal. 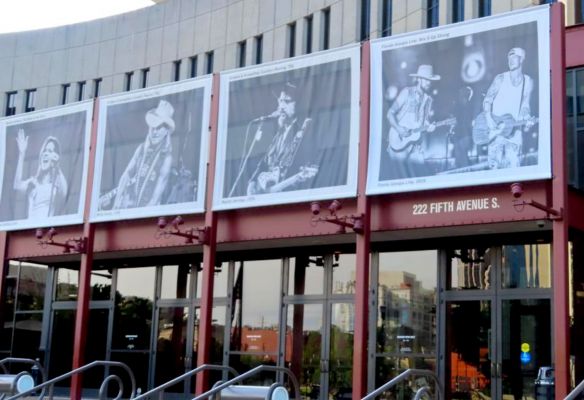 With their connecting flight via Philadelphia, it was a long first day filled with travel for Rachel and Bill. Their airport transfer had picked them up about 5ish in the morning UK time, and it wasn’t until about 10 in the evening UK time before they arrived at their hotel. (Luckily, there were plenty of taxis upon arrival at the airport, and taxi transfers took only about 20 minutes, and cost $36.) 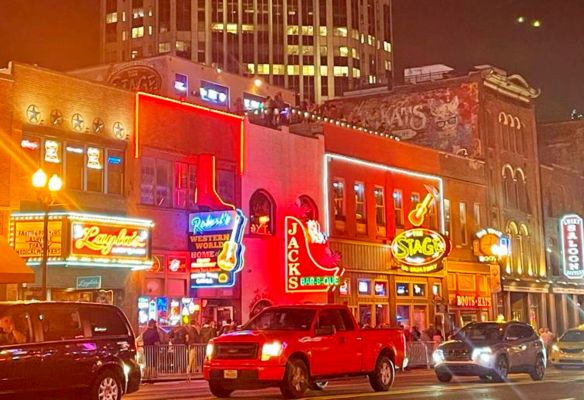 Walking to the Broadway on their first night, Rachel and Bill were soon bowled over by what could now be called the new Nashville Sound, a raucous cacophony of bands playing simultaneously, and Bachelorette parties cackling and squealing (Nashville is a popular city for both hen and stag dos). It’s certainly a lively city and the Broadway seems to be the epicentre. And celebrations aren’t confined to night-time; lined with four-storey bars, with bands playing on each storey, music starts from 10am. Bands swap every two hours, and there are up to 1600 performances a day on Broadway! 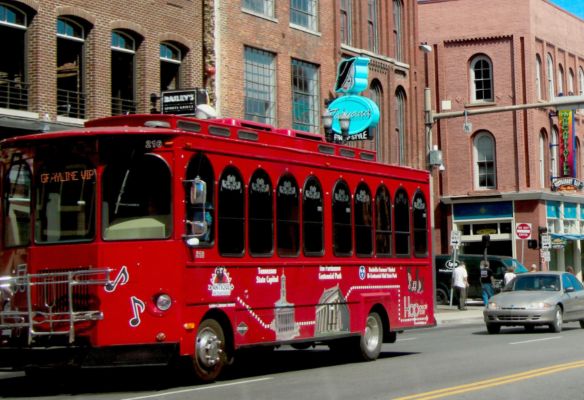 With only two nights in Nashville, there was only one full day to explore, so it was an early start to make the most of the day. Hop-on and hop-off tours are a great way to orientate around a city, especially if you’re limited on time, and while there are the traditional open-top buses available, Rachel and Bill went for an old town trolley tour, which had very good live commentary. It’s possible to buy tickets for one or two days, or to join the ‘Soul of Music City’ tour in the evening, and there are 14 stops on the route, which showcase the varied attractions and landmarks of the city. The stops include:

The trolley drives through Nashville’s famed Music Row between stops 11 and 12, and is widely considered to be the heart of the city’s entertainment industry. Centred on 16th and 17th Avenues South, the area is home to numerous record labels, publishing houses, music licensing firms, video production houses, radio networks, radio stations, and – of course – recording studios, including RCA’s famed Studio A and Studio B. 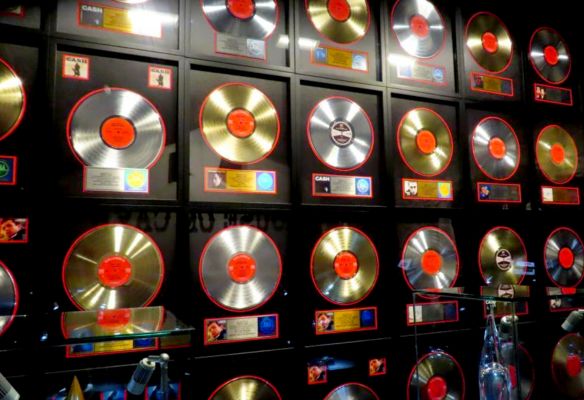 The district has been marked for extensive historical preservation, and at one end of Music Row, Belmont University campus and Vanderbilt University are situated. While Nashville is world-famous for its music industry, it’s also home to 24 institutions of higher education, giving it the moniker ‘Athens of the South’ in a comparison to the ancient city of learning and site of Plato’s Academy.

While there are clearly many landmarks in Nashville linked to the music industry, and many of these feature as stops on the trolley bus route, it’s a busy, vibrant city, but there are oases of green tranquillity dotted around. 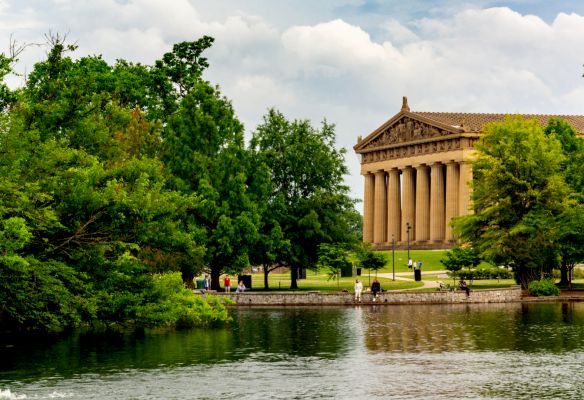 The 132-acre Centennial Park, two miles west of Downtown Nashville, was originally farmland cultivated by some of the first families to settle in Nashville, but was used as a park after the Civil War. Between 1884 and 1895, part of the site became a racetrack known as West Side Park, but it was then redeveloped as the site of the Tennessee Centennial and International Exposition held in 1897. For the Exposition, the area was landscaped, including a beautiful artificial lake – named Lake Wautauga after the area in western North Carolina where a number of the first Nashvillians had originated from – as well as sunken gardens and a bandshell for music performances. In keeping with the city’s sobriquet ‘Athens of the South’, one of the supposedly temporary structures designed for the Exposition was a replica of the Parthenon, but it remained long after the Exposition, and even rebuilt in the 1920s in steel and concrete. 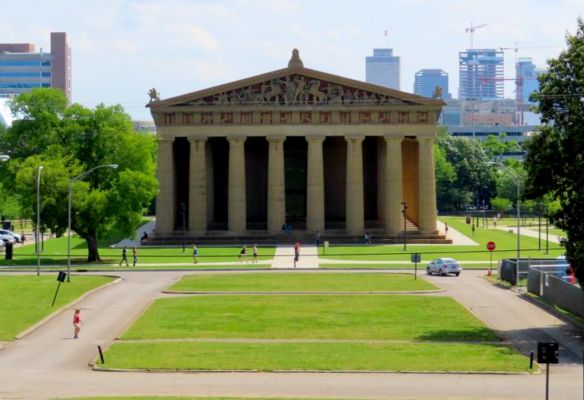 The Parthenon is often used as an art gallery, and in 1990, local sculptor Alan LeQuire (who also sculpted the Musica statue) created a 42-foot tall replica of the Pallas Athena statue, dedicated to the women’s suffrage movement. Until the 1960s, Jim Crow laws applied, excluding African Americans from the Park or from using the swimming pool.

On 1 June 1996, the Bicentennial Capitol Mall State Park was opened to commemorate the 200 years since Tennessee became a state, and with over 2.5 annual visitors, it’s the most visited state park in Tennessee. 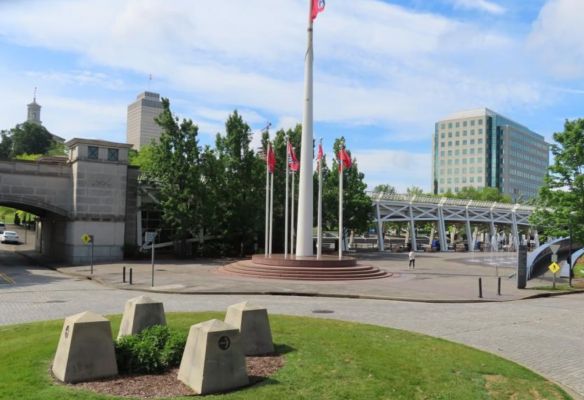 The Mall is lined on both sides with Tennessee’s state tree – tulip poplars – and the Park populated with trees and shrubs native to the state. The Park is filled with symbolism showcasing the state’s history, geography, and characteristics, from the 31 geyser-like fountains representing the state’s major rivers and waterways to the ‘Court of 3 Stars’, a circular plaza or red, white, and blue granite in the tri-star logo that appears on the state flag. The Court of 3 Stars is surrounded by 50 columns containing a 95-bell carillon (95 to represent the state counties, as well as Tennessee’ musical legacy), which play a portion of the Tennessee Waltz every 15 minutes, and the entire song on the hour, with a 96th bell on Capitol Hill joining in at the top of each hour to symbolise the government’s responsiveness to the people. The Map Plaza, another major feature in the Park, has a 200ft wide granite state map highlighting its cities, counties, rivers, major highways and railroads, and eight smaller granite maps focusing on the topography, geology, original inhabitants, musical heritage and recreational opportunities in Tennessee. During the park’s groundbreaking, the Governor’s Time Capsule was buried in one of the Park’s walkways – the Path of Volunteers (alluding to Tennessee’s nickname as ‘The Volunteer state’) – to be opened on 27 June, 2094, while more time capsules from each county (to be opened on 1 June, 2096, Tennessee’s tricentennial) are buried along the eastern outer path (the Walkway of Counties, which represents Tennessee’s geography from east to west). Rachel and Bill visited the Farmers’ Market, offering a wide selection of different cuisines. The Farmers’ Market can be found immediately west of the Park and is conveniently one of the stops on the trolley bus route. 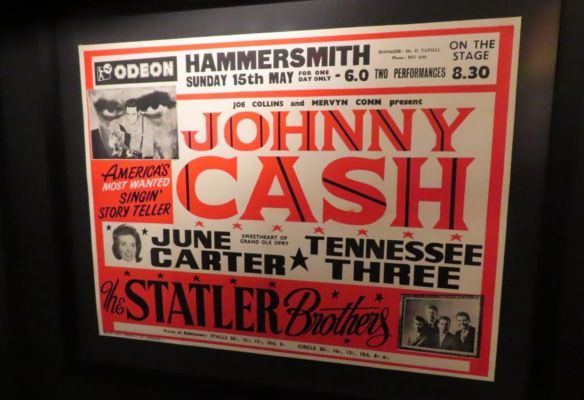 The trolley bus tour gave them an expansive overview of Nashville on a complete loop, as well as plenty of nuggets of local information and history. During their stay, they also visited the Johnny Cash Museum (one of only six attractions in the city to receive the coveted AAA Gem rating, and ranked #1 Music Museum by Condé Nast, Forbes, and National Geographic Traveler) and the Jason Aldean Rooftop Bar, where they enjoyed a great live performance from a husband-and-wife duet. 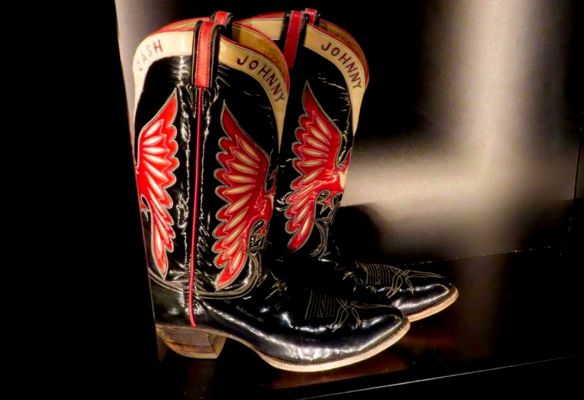 Torrential rain on their second (and final) night in Nashville put the dampeners on experiencing any more of the city’s nightlife, although it seems that Broadway is perhaps the one place on earth that’s too loud even for Bill (perhaps because he’s now hit that milestone age of 60). Although the city might have been a bit overwhelmingly raucous, with the honky tonks clashing decibels in a ferocious wall of sound that made bands’ performances almost indistinguishable from each other, they felt glad that they had been to see what it was all about, even if (unlike some of the other destinations on their trip) they wouldn’t hurry back.

If you would like to find out more about US holidays, call our travel specialists today

Rachel on the Road: Deep South US Fly-Drive

Cyprus in the Covid-Era: Flying Out

Read a first-hand account of what it's like to fly out to Cyprus from Stansted with Jet2 Holidays during the Covid-era from Select Travel Holiday's homeworking travel advisor and family holiday specialist, Julie Turner
Read More

The on-going Covid-19 pandemic has affected all areas of our lives, including our holidays and cruises, but our values, expertise, and industry relationships have never been so beneficial for our clients
Read More